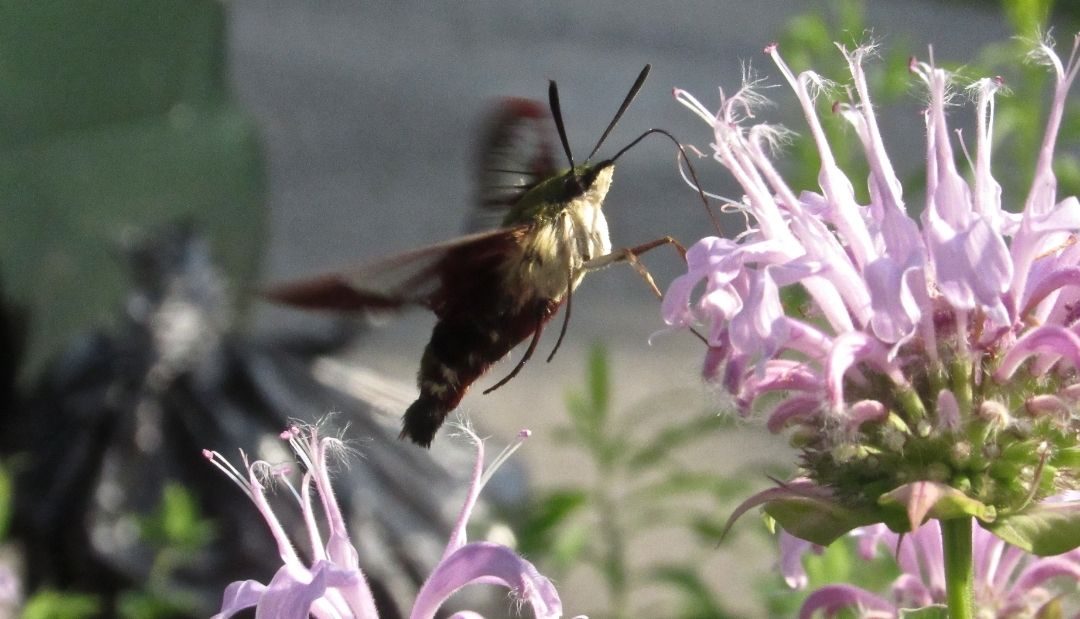 There are two species of Hummingbird Moths in Pennsylvania. The Hummingbird Clearwing Moth ( Hemaris thesby ) is olive green. Its transparent wings have dark red borders and veins. The Snowberry Clearwing ( Hemaris diffinis ) is olive-gold, black, and blue in color. Its wings are also transparent with dark red borders, but the wing veins are black. Unlike most moths which are active at night, hummingbird moths are active during the day. They use their long curled up tube-like tongues to sip sweet nectar from flowers. Like other moths and butterflies, hummingbird moths live the first part of their lives as caterpillars. The bodies of these large green caterpillars have white or yellow speckles, a row of black or pink and white spots down their sides and a red or white horn on their rear ends. They look a lot like the Horn Worm caterpillars that feast on your tomato plants, but these caterpillars eat the leaves of snowberry shrubs, hawthorn, honeysuckle, dogbane, cherry trees and plum trees. The adults sip nectar from a wide variety of flowers. When they are ready to transform into adult moths, the caterpillars drop to the ground and spin a loose fuzzy cocoon around themselves. The cocoon will remain under the soil or leaf litter until it hatches the following spring.

When we think of a moth, we usually think of the small tan, white, or gray moths that fly around our porch lights at night, but some moths like the jade green Luna Moth and the scarlet and white Cecropia Moth are as big and brightly colored as butterflies. On the other hand, some butterflies are small and brown, tan or gray in color.

Both are insects with 3 body parts ( head, thorax, abdomen ), two sets of wings, six legs and antenna. They have a long curled up tongue ( proboscis ) used to sip nectar from flowers. However, some of the large colorful adult Saturnid moths have no moth parts and do not eat at all. The life cycles of both moths and butterflies are the same, but they differ when the caterpillars are ready to change into adults. A moth caterpillar use a silken thread to spin a brown fuzzy cocoon that looks almost like a paper bag around itself. Sometimes leaves are incorporated into the cocoon for camouflage. A butterfly caterpillar sheds its outer skin, and its body forms a hard case called a chrysalis. A chrysalis may be brightly colored or look like dry brown rolled up leaves. Adult butterflies have slender smooth bodies, while moths are more plump and fuzzy. Butterfly antenna are thin and with knobs at the ends. Moth antenna do not have knobs and are often feathery. When feeding or resting, butterflies usually hold their wings closed over their backs, while moths usually leave their wings open or fold them to their sides. Butterflies are active during the day ( diurnal ) , and most moths are active during the night ( nocturnal ), but, as we have seen, there are exceptions such as the Hummingbird moths.

Whether it’s a moth or a butterfly or a Hummingbird Moth, they are all beautiful and fascinating insects.