Father Bill Schwartz: All Things to All People 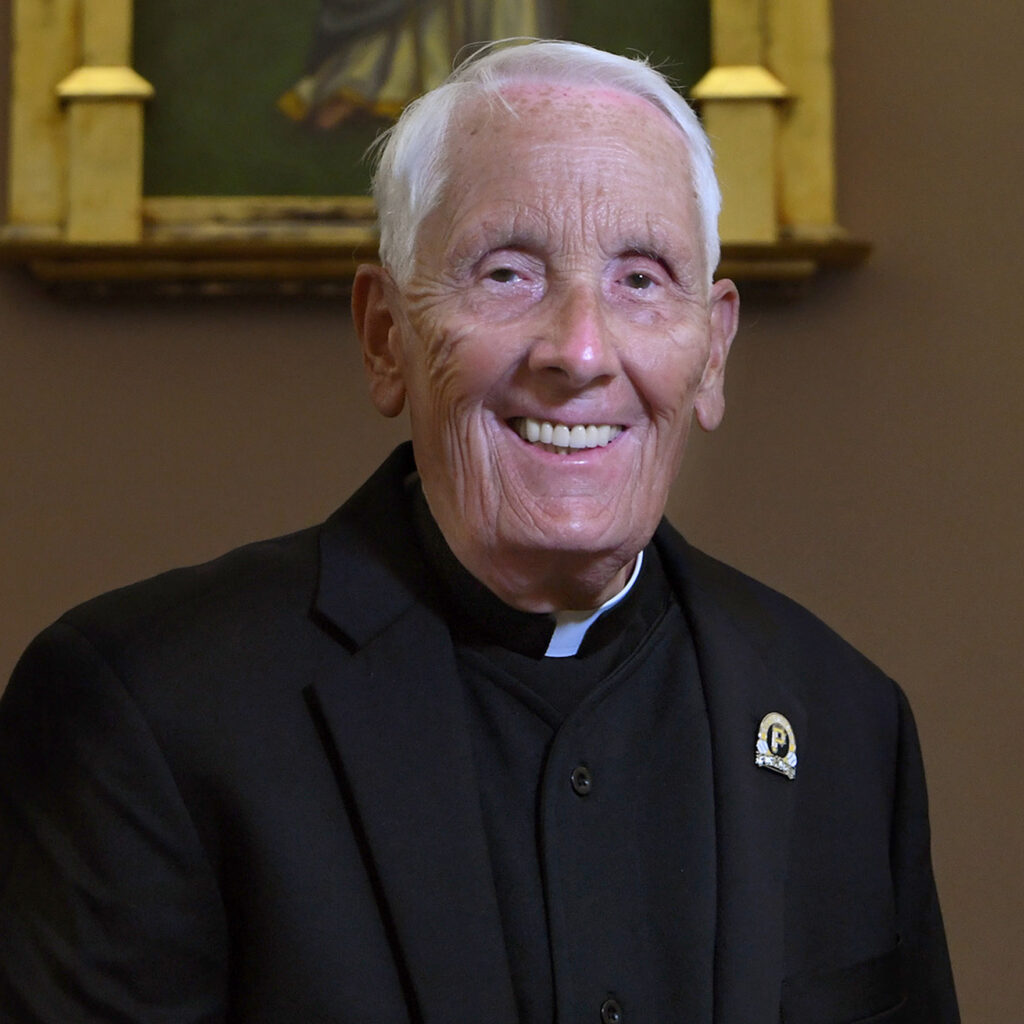 To the community of Chippewa, Father Bill Schwartz is a listening ear and a kind encourager. His role in the lives of both unbelievers and believers grows out of the care that he demonstrates to everyone he comes to know. Personal connections are first and foremost in the life of Father Bill – caring AND listening. According to him, that’s what life is all about – respect, appreciation, and human dignity.

Father Bill was ordained to the Priesthood on May 18, 1968. The Catholic Diocese of Pittsburgh (which coordinates much of the ministry of Catholic priests in our greater community) assigned Father Bill to Beaver County in 2008. Through the years, he has ministered to the people of God beginning in 1968 in West Mifflin and continuing in Beaver County until the time of his retirement on December 22, 2012. Father Bill taught at Our Lady of the Sacred Heart Catholic High School for ten years and ministered to Brighton Rehabilitation and Wellness Center (formerly Friendship Ridge) and Heritage Valley, Beaver.

His “love of God and care for all of God’s people” is what drew Father Bill to ministry he told us during a recent conversation. His parents lived and taught him a hierarchy of values, beginning with respect for self and for others from an early age.

“My dad, my mom… they gave me a good example. The foundation was right there,” he recalled.

Raised on Mt. Washington in Pittsburgh, he attended school at St. Mary of the Mount (which later merged with Bishop Leonard Catholic School) and played baseball for Mt. Washington’s very first little league team, Plymouth Blind. As it turns out, those early years of his love for playing baseball foreshadowed Father Bill’s future role as Chaplain to the Pittsburgh Pirates.

Father Bill became, at first, a part-time Chaplain to the Pirates in 2008, celebrating Mass every third week after an interesting encounter with a Sports Illustrated photographer. While Father Bill and a friend were sitting next to the visitor’s dugout, watching a Pirates Baseball Game, this photographer was looking for a “resilient Pirates fan” to interview. The reporter was pointed out to Father Bill and Sports Illustrated published a featured story about the subsequent interview.

The appearance of Father Bill’s name in the magazine caught the attention of Catholic Athletes for Christ (CAC), a Catholic ministry that works with professional, college, high school level athletes. CAC then reached out to Father Bill and asked if he would consider ministering to the Pirates. There was no hesitation on his part – a “definite YES!”

Looking back on the interview which started it all, Father Bill commented, “God put me [and] my friend at the right place at the right time, and if it hadn’t been for him, this would never have happened.”

Father Bill attends every Pirates game at PNC Park, and through the years he has become a face of PNC Park to administration, players, and staff. He warmly welcomes visitors, eager to care for anyone and everyone through personal conversations. Father Bill has been able to become more involved in the Pirates organization and grow closer to both players and staff during his time there.

To people associated with the team and beyond, Father Bill has become known as the “Pirates Padre.”

“You cannot put a dollar amount on the ministry, given and received, from the Pirates Baseball Club …” said Father Bill, “I’m very blessed and very humbled with the opportunity given to me.  There’s no question about it.”

He continues to celebrate Mass (once restrictions are completely lifted) weekly to the Pirates and offers support wherever requested. Each day brings new opportunities, from praying and talking with colleagues to supporting Pirates Charities in every way possible.

“There’s no regular day…” explained Father Bill with a laugh, “I can go in and start out in one area and wind up with many different people from different areas with different issues.” Father Bill makes himself available, and each day plays out uniquely based on the needs of those around him at any given time.

“I’m there for everyone,” said Father Bill, and nothing is more important to him than returning gratitude and appreciation to the Pirates organization for how he has been respected and appreciated, as well as BRWC, Saint Monica Parish, and many people in the community, even during the recent COVID-19 pandemic.

When the pandemic first struck, Father Bill was in Bradenton, Florida, where the Pirates have their spring training. Spring training was canceled on March 12, 2020, with the onset of COVID-19 in the United States.

Father Bill was due to return to Pittsburgh on March 16, but his friends from PNC Park, whom he was staying with, convinced him to stay a few more days. Father Bill would later discover that his initial plans for return would have taken him to the location of several COVID-19 outbreaks. Had he not stayed those few extra days, he believes he would have been exposed to the virus and possibly death.

Once he returned to Pittsburgh, a medic requested that Father Bill quarantine himself to avoid the risk of infection. He missed the personal connection that face-to-face encounters afford yet concluded that ministry would suffer if he were to take ill. Father Bill has since then spent countless hours on phone calls, FaceTime calls, Zoom and instant messaging platforms to make up for his physical absence. From his residence, he ministered to people working though trauma, sadness, fatigue, death etc. 24/7 in order to be “there” for everyone as best he could.

Father Bill continues to demonstrate care for our greater community, even today. Whatever the situation calls for, he’s there to serve the Pittsburgh Pirates, BRWC, St. Monica Parish, and our Chippewa community. Often the cost of pursuing your purpose is great. But the cost of not pursuing it is even greater. People come first, and Father Bill is certainly a “people person.”