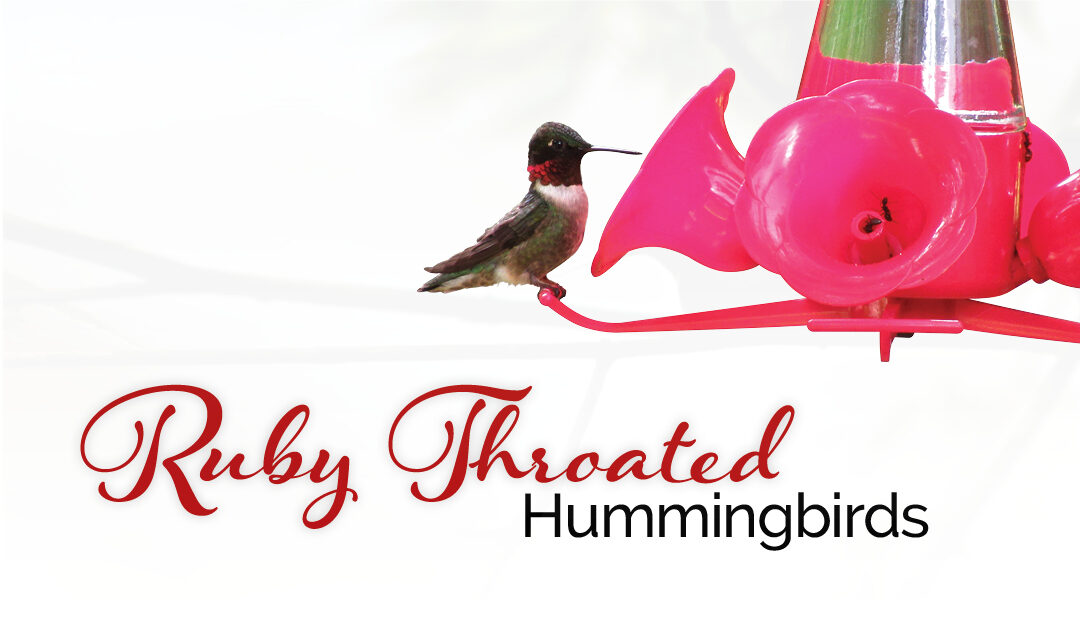 Like aerial acrobats, hummingbirds dart through our summer gardens—their iridescent colors flashing like jewels. There are 388 species of hummingbirds found in North, Central, and South America, but only one is found in Pennsylvania—the Ruby Throated Hummingbird. Named for the male’s bright red bib, called a gorget, adult Ruby Throated Hummingbirds are about three inches in length and weigh 1/10 of an ounce, about the weight of a penny. The female lacks the ruby red gorget. Both males and females have bronze green backs, pale bellies, and long bills.

Hummingbirds are amazing fliers. They can fly backwards, sideways, up and down, upside down, and hover in one spot—flying at speeds from 4-60 mph. During flight, their wings beat 53 to 80 times a second, making that distinctive humming sound. In contrast to the human heart which beats an average of 80 times a minute, a hummingbird’s heart beats about 20 times a second or 500-1200 times a minute—250 times a minute when the bird is resting. That takes a lot of energy!

Hummingbirds eat two to three times their body weight every day, feeding on average every 20 minutes. To match the hummingbird’s metabolism, the average human would have to eat 360 pounds of potatoes or 1,440 hamburgers or drink 440 cans of Coke daily! At night, to conserve energy and to keep from starving, hummingbirds enter a state of torpor which is something like hibernation. Body temperature drops, heartbeat and respiration slow, and metabolism slows by 90%.

We usually see these tiny birds sipping nectar from flowers. The birds do not suck up the nectar through their long bills like sipping through a straw. They have long, thin tongues split at the end, with fringed grooves. They lap up the nectar like a kitty lapping up milk. The bird’s tongue flicks in and out at nearly 20 times a second. While nectar is high in sugar and carbohydrates, hummingbirds get the protein they need from eating small insects, caterpillars, insect eggs, and spiders. About 60% of their diet is insects.

In Pennsylvania, the male hummingbirds arrive first between late April and early May. The males each establish a territory which they aggressively defend from all intruders. You can often see males engaged in fierce aerial combat, chasing and bumping into each other, even using their long bills like swords. Females arrive a few weeks later. After impressing his lady love with an elaborate aerial courtship display, the male leads her to his territory and the two mate. After mating, the male leaves the female to build the nest, incubate the eggs, and care for the young by herself.

High in the trees, the female builds a nest from bits of leaves, bud scales, and other plant materials held together with spider webs. The soft, stretchy spider webbing allows the nest to expand as the baby birds inside it grow bigger. Mama bird lays two white, oval shaped eggs about 1/2 inch long and weighing .02 ounces (about the size of a Tic Tac mint). For two to three weeks, mama feeds her babies regurgitated insects, providing them with lots of protein to ensure their growth. After the babies have left the nest, she continues to feed them for another week. Hummingbirds often return to the same nesting area year after year. Our Pennsylvania Ruby Throated Hummingbirds leave in early September and migrate south, spending the winter in southern Florida, Texas, Louisiana, Mexico, and South America, sometimes even flying 500 miles nonstop over the Gulf of Mexico.

You can attract brightly colored little hummingbirds to your yard by putting up a commercial feeder. There are several different types but be sure to choose one that is easy to clean. Fill your feeder with a mixture of 1 part sugar to 4 parts water. Most feeders have some parts that are red, so it is not necessary to add red dye. Stir the water and sugar together until the sugar is dissolved. You can also bring the mixture to a boil, but it isn’t absolutely necessary. Never use artificial sweetener; it does not have the nutrients the birds need. Never, never use honey! Honey contains a natural fungus that is fatal to hummingbirds. The fungus causes the bird’s tongue to swell, and it starves to death.

Replace the sugar water every three to five days or when the mixture looks cloudy. The cloudiness is caused by mold which will also make the birds sick. Place the feeder in an open area near flowers.

Hummingbirds are territorial, so be prepared for some squabbling, chasing, and squeaking as the birds fight for feeding rights. In addition to commercial feeders, try putting out a dish of ripe fruit such as bananas or melon. The fruit will attract gnats and other small insects the hummers eat.

You can also attract hummingbirds by putting a bird bath or gently flowing fountain in your yard. Hummingbirds need to drink, and they love to bathe, fluffing up their feathers and splashing in the water.

Of course, planting a flower garden will also attract hummingbirds. Although it is true that hummers are mostly attracted to red blossoms, they will visit orange, pink, and other colored flowers as well. The shape of the flower is important, too. Hummers are most attracted to flowers that are tube or bell shaped, flowers that hang downward, or flowers that have folded back petals so the bird’s long tongue can reach the sweet nectar inside. Salvia, geraniums, petunias, honeysuckle vines, cardinal flower, phlox, and bee balm are just a few of the flowers that attract hummingbirds. For a more complete list of plants that attract hummingbirds, call the Sahli Nature Park at 724-384-1598 and leave your name and address or email, and we will be happy to send you more information.