From Our Police Department 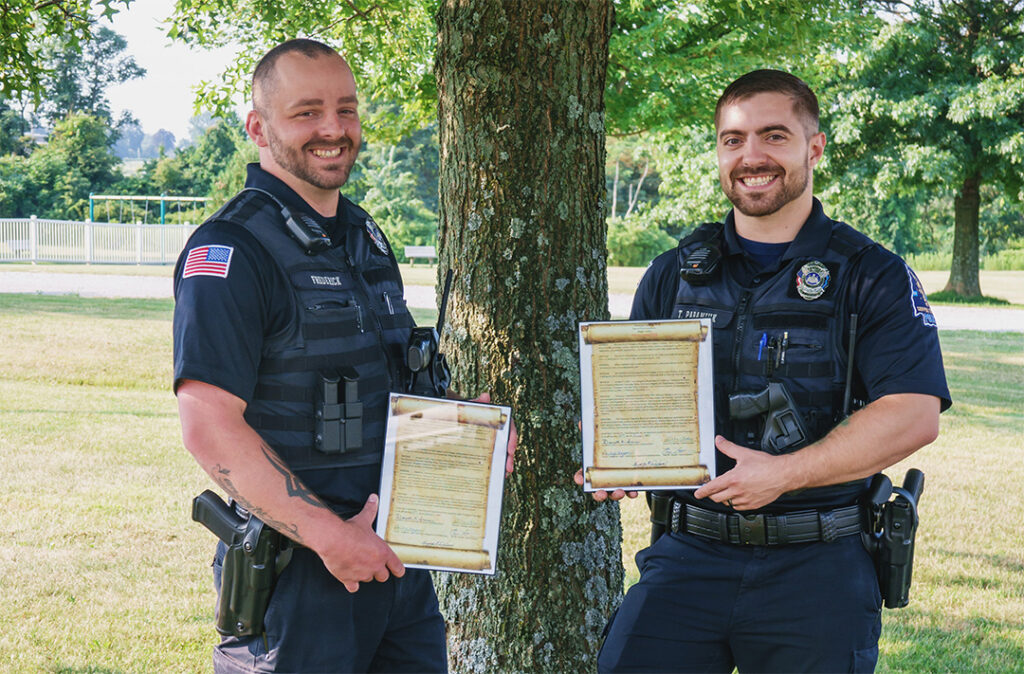 This past April 7, 2021, began like any other day for Chippewa Township police offers Dan Frederick and Tom Paraniuk. As they were making their rounds on patrol, a call came in from Patterson Township about a serious accident that had taken place on Darlington Rd.

When neighboring communities like Patterson Township or South Beaver get a bad call, our Chippewa Police Department often gets on the radio to ask if they need a hand. And on this particular day, Officer Frederick and Officer Paraniuk were already in route to the scene when Asst. Chief of Police from Patterson Township, Officer Bathgate, put in a call requesting them.

Officer Paraniuk is a full-time clinical supervisor at Heritage Valley Beaver and works part-time for the Chippewa Police Department. His background as an emergency room nurse played a big role in his ability to take control of the situation.

The accident involved a man riding a motorcycle, whose crash left him with severe injuries – his leg was profusely bleeding, and he was also suffering from an open head wound.

First thing Officer Paraniuk went to do was stop the bleeding from his leg. He applied one tourniquet from a firefighter who had arrived on scene, before continuing to apply his own tourniquet that he carries with him. He then packed the wound with gauze and wrapped it as best he could. Still waiting for EMS at this point, he moved on to wrap the man’s head as well. Northwestern EMS then arrived on the scene, and Officer Paraniuk continued to work alongside them.

Officer Frederick worked alongside the medical team, helping to keep the injured man awake and ensuring that the blood from his head wound didn’t enter his eyes.

Officer Paraniuk then started an IV and an IO – drilling into the bone marrow of the injured man’s leg in order to directly inject medicine to the wound. At this point the man’s pulses stopped and the medical team began CPR. A firefighter then jumped into the driver’s seat of the ambulance and started driving to the landing zone where a helicopter was waiting.

On the way to the landing zone, the man’s pulse returned. The flight crew came on to the ambulance and Officer Paraniuk assisted them with intubation and stabilizing the injured man enough to move him, and then helped carry him to the helicopter. The man was taken via helicopter to UMPC Presbyterian Hospital in Pittsburgh. After a few days, he tragically passed away, but due to the great work of many emergency responders, his family was able to say goodbye and his organs were successfully able to be donated.

Both officers shared six simple words that they always keep in mind – “We’re here to protect and serve.”

We are so thankful for everything the police department does for our Township. Thank you, Officer Frederick and Officer Paraniuk!